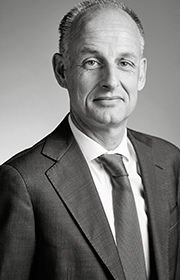 He then joined the legal department of a Swiss private bank. In 1998 he was head of its Gibraltar subsidiary and in 2001 took over the responsibility of its Canadian operations in Montréal.

Upon his return in Switzerland he became head of the UK Market, Private Banking, and then Co-Chief Operating Officer. He also oversaw the Nassau office, which activities encompassed private banking, corporate and trust services.

In 2016 he joined the management of a Private Bank in Lausanne as General Counsel.

In 2019 Me Frédéric Binder became a Member of the Geneva Bar and Counsel at Bonnant & Partners.

He advises private and institutional clients, with a focus in banking and financial services.

He also acts as an independent non-executive Director on the board of companies both in and outside the financial services industry.

He mainly practices in French and in English.